Preparing for the Fight Against Cancer 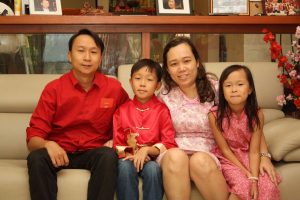 “This is my fourth year. One more year and I can call myself cancer-free.”

Ashley Lam is good-natured in her matter-of-factness. Her house is cheerful, books and stationery arranged neatly in large bookcases. Her son, Chung Wei, is pottering about, while her daughter Sue Enn is drawing at the table. Her husband, Khoo Nee Wern, is tidying up the kitchen. There’s nothing visible that even hints at the episode Ashley went through four years ago. It’s a regular Sunday, and all is well.

“I’m just living day to day,” Ashley says brightly. She isn’t in denial about her cancer and its subsequent treatments, but she maintains a determined, positive attitude. “If you ask any survivor, we always worry whether our next check-up will turn out fine. It’s always at the back of the mind.” However, living with fear was not an option.

When Ashley was first diagnosed, her daughter was barely three years old. Ashley and Nee Wern decided to keep the news from them, because they didn’t want to bring such a big word into their children’s lives. And apart from relatives and a few close friends, she didn’t tell anybody else. While she knew that there were a lot of kind-hearted people around her, she didn’t need anybody to distract her with well-meaning advice to “do this treatment” or “don’t eat that thing”. She kept it quiet to focus on herself, and only when treatment was over did she decide to open up. “I thought that maybe it was about time to tell people that yes, it’s scary, but it’s not a death sentence.”

Women are usually told by doctors that cancerous lumps are usually not painful. But one day, Ashley discovered a lump that was painful to the touch; a lump that seemed to appear overnight. A visit to the gynaecologist followed, along with a referral to a breast surgeon for a biopsy. “The waiting period for the result was horrible. I had a very uneasy feeling.” It was extremely emotional for her, and she asked “Why me?” There was nothing in her family history to indicate propensity for cancer. Her husband in turn, gently chided her by asking “Why not you?”

Her doctor arranged her treatment process promptly. “With the surgery, the healing process, all of that took me away from the ‘Why?’” She took leave from work to focus on herself and her children, and her office let her go on paid medical leave. That took away a little bit of the financial burden, but when the costs of the medication started rolling in, they were devastated.

As a quantity surveyor, her starting salary was not huge. However, before she got married, she invested a small sum in an insurance plan. After marriage, Ashley and Nee Wern took out further insurance policies for the family. “Sometimes in the busyness of life, you mustn’t forget about insurance. Don’t be in a place where when something happens do you only think about how you should have had a plan in place.” When cancer struck, Ashley cashed out her policy, which helped pay off bigger liabilities. This in turn has helped her focus on the treatment, on herself, and on her children.

It even helped her in not-so-obvious ways. When she needed to get away from the stresses of her condition, the family was able to travel to local beaches to relax – something that is more necessary than some may realise.

Preparing for the worst crossed Ashley’s mind but she refused to let it linger. Except for a time when she half-jokingly pestered her husband to buy a burial plot, she knew that negative thoughts would consume her. “Ultimately, if anything happens to me, the financial backup has to be there for the three of them. You cannot deny that money plays an important role, so that it can divert your focus to the necessary.”

Ashley chose to call her episode with cancer a wake-up call. “I had quite a bad lifestyle before this. I’m a workaholic, and I have a temper. And I can also be quite particular.” She says she’s a lot calmer now than before her diagnosis, and she hopes to be even more so. Ashley, like other moms, hopes to grow old, and see her kids marry and have children of her own.

“I always tell my husband that I’m on borrowed time.” She’s glad that the medication worked, and even though work still consumes her sometimes, her children are everything to her. “And after that my husband!” she adds quickly, as Nee Wern turns his head towards her with a smile.

A friend recommended a support group on Facebook for breast cancer survivors, which she says has helped her and her family a lot. “You’d be amazed at how many young mothers out there that have breast cancer,” she says wistfully. Whenever a member of the support group had problems, they would post it on the group page and the others would help any way that they could. They shared progress reports, inspiring quotes, anything to help uplift each other.

Support also came by way of Nee Wern’s aunt, who was Ashley’s main carer. “Many of my in-laws live nearby, so they are my strongest support.”

Ashley is also grateful that her children are young, so they go about their day not knowing how ill their mother was. Instead, she and her husband took the opportunity to turn this situation into a positive one. She made sure the whole family, not just her, engaged in a healthy lifestyle. Her children drink plenty of water, swim and do gymnastics regularly. The family eats better than ever before, even affording to go organic on occasion. On someday telling her kids about what happened, she says, “Maybe when my daughter is older… in case she has the risk passed down to her. I will tell her why she needs to keep healthy. Now I can tell people that my kids eat broccoli!”

Despite everything, she says she is lucky. “I had two kids before this hit me. And that it happened at 36, when my body was strong enough to handle the chemo. If it hit me at 50, I don’t think I would be handling it as well.” Her main advice would be to prepare what you can financially so you can focus on what truly matters. “Ladies, especially. The moment they start working, they should immediately invest in an insurance policy. Because you just don’t know. I never knew that I would get cancer at 36! We can never prepare ourselves too early.”

AXA 200 CancerCare policy helps with financial, emotional and mental preparedness. The policy provides financial support of up to 200% of the cancer sum insured from as low as RM1.50, with an affordable yet guaranteed premium that is fixed for 20 years. 200 CancerCare policy also has an extensive concierge service that helps arrange referrals for everything from psychological consultation, dietician, hair and wig care services and transport arrangement. 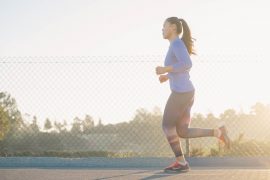 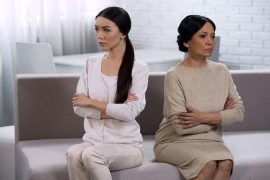