My Story: Why I Make DIY Toys for My Toddler 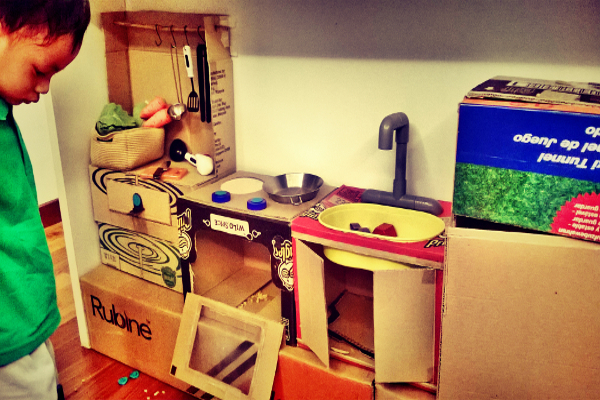 How can I resist getting excited over baby toys when the designs are so vibrant and the products show how they aid baby’s development? But then I get frustrated as my son H didn’t exactly play with the toy as it was intended to be. He chews the handle but not the teething pad, holds the rattle by the ball end and fiddles with the label tags but not the spinner. In fact, he plays with the house keys, tugs my shawl, crawls under the chair and sticks his hands in any gaps he could find.

I came across Pinterest and mummy blogs that have shared pictures of their home learning activities with homemade toys made from items easily found in any home. When H was seven months old, I caught him exploring and rolling a mineral water bottle with a little bit of water inside. I added some food colouring to the water and made several bottles for different colours. Since it was just any mineral water bottle, there was less fuss about forgetting to bring his toys when we are out and about. How practical, I thought! Even the kitchen roll tubes were turned into a fun toy. 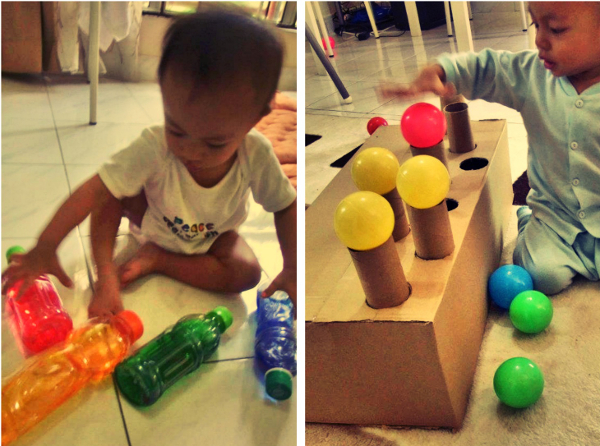 I decided to make a car for his first birthday from one of the empty boxes. It took me almost three months to complete it having only one to two uninterrupted hours per day. Not only did he enjoy it, even his cousins loved playing with it despite being so worn out a year later. Playing with toys made from cardboards also introduced an idea to him that things can be made or easily fixed.

But it isn’t always a pretty picture. Sometimes he was not interested and didn’t even play with the toy I made. Other times they were a big hit. The PVC pipe water play was truly a wonderland for him. He jumped through the water fountain, poured water onto the waterwheel, and got himself soaked and drenched! 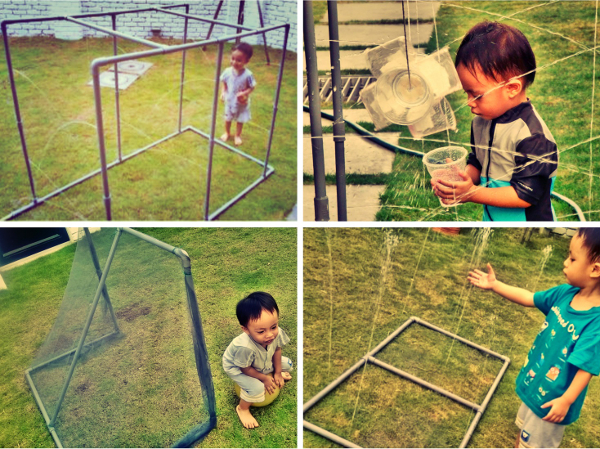 Eventually he will get bored of it as there is a ‘season’ to everything he plays with – sometimes the interest disappears but might return later. My husband transformed the PVC pipes into a goal post as soon as he got interested in kicking some balls and the remaining pipes became a new PVC pipe water play with water shooting in different ways than the old one. That is the beauty of DIY toys – it is open ended, it can be modified and repairable if broken.

Of course I still love walking into toy shops. But recalling the short documentary trailer I saw on Consuming Kids: Commercialization Of Childhood shows how children are consistently and systematically exposed to consumerism since they were born. Toys are getting cheaper and more realistic. It is hard to resist because they seem to be good value for money. I certainly cannot protect them from consumerism, especially living in the city, but what I can do is to prepare them to handle consumerism. H is so fortunate that he is constantly showered with toys from aunts and uncles, so I’ll do as much to keep the balance.

Realising on the morning of his 3rd birthday that I haven’t gotten him a present, I recalled how he has been putting the laundry basket over his head to make funny acts. Suddenly I got an idea about his current helicopter obsession and with the little time I had, made some additions to the basket and turned it into a giant helicopter! 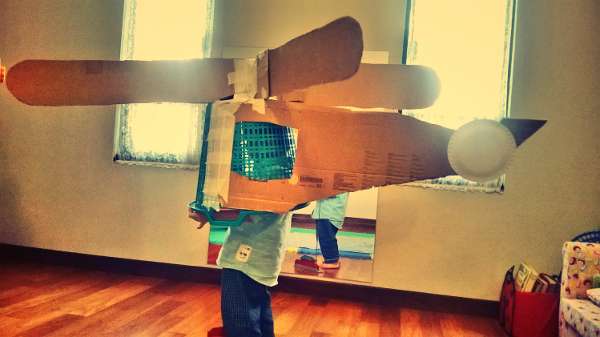 If you look at toy shops these days, the aisles are either lit up entirely pink or entirely blue. Toys have become very gender-stereotyped. This means the kitchen set I find are mostly in the colour of pink targeted for girls. So this time around I made a kitchen set out of cardboards whereas the toy pots, pans and cutleries are store-bought to complement the play set. Making our own toys enable us to limit the decorations so it can be neutral and more focused on the play itself.

Besides toys, most of the fun didn’t require anything to make where we’ll just play outdoors first thing in the morning. There is so much fun and learning just by checking out our own shadows in the cool morning sun, stepping into water puddles after the rain, watering the plants (or your own shoes!), watching cats, birds, bees, butterflies and snails in the garden, collecting sticks and dried leaves, or simply sitting down to listen to the surroundings and try to identify what those sounds are.

Toys may not be affordable, but everyone should be able to afford play!

Ernadia is a mum of two kids and a former national gymnast who now enjoys jumping and tumbling on the bed together with her toddler. While she strives to be a good parent, her kids are subtly teaching her baby steps on what life is all about. 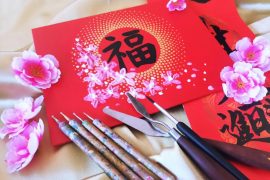 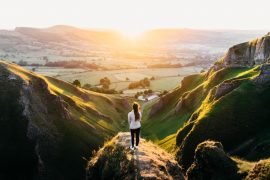 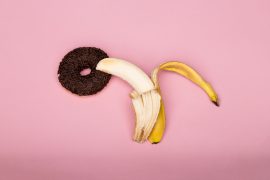