Sharing the Load: Fathers who Parent and Partner

More men today are sharing responsibilities and growing into their roles as both parent and partner. Gone are the days where fathers were content with being the silent breadwinner of the family.  Deputy Minister of Women, Family and Community Development, Hannah Yeoh rightly called for a new approach  to develop childcare policies that included a father’s active participation. This is a welcome call for Malaysian parents and families, as shared parenting correlates with stable long-term relationships.

Makchic celebrates these Malaysian fathers and many others who are leading the way.

Sharing roles and walking the talk

Mohamad Azman is the father of an eight-year-old girl and two boys aged five and two. He is married to Dr. Habibah, a haematologist who he admiringly describes as ‘a certifiable genius of a doctor’.  Azman works as a sales and marketing director.

For 41-year-old Azman, being a father also means being a shining example as a partner and a parent.

Their model of a respectful and supportive partnership is an important aspect in raising his children to treat others as they expect to be treated. They divide the chores and duties, but sometimes help the other out  “just to make it easier for them”. Epitomising a true partnership, Azman wholeheartedly supports his wife’s ambitions. In 2014, Dr. Habibah had the opportunity to take an academic sabbatical to further her career.  To seize this opportunity, the family uprooted to the United Kingdom for a year. Azman shares that even before they were married, they had always assumed that they would support each other’s careers.

For him, fatherhood has also been a lesson in humility. He says that although you may set out to teach your children about life, they end up teaching you instead. Through them, he is aware of his own hypocrisy and is conscious when he falls short of his own standards.  Azman strives to be a better role model to his children by being more aware of his words and actions.

Azman’s own father used to do this, when he made sure that Azman followed him to the market every Saturday for the family’s weekly grocery shopping. Now, as a father, instead of instructing or completing tasks for his children, Azman tidies up, does the gardening and prepares meals together with them. Sometimes alongside a musical education that includes the Beatles and Queen!

Restraint, however, is one of the key lessons that fatherhood is continuously teaching him. He feels that as a father, he needs to strike a balance between protecting his children and allowing them to learn from their mistakes and heartbreaks. It has also given him a new perspective on life and the world around him. For example after his daughter arrived, listening to the Beatles’ ‘She’s Leaving Home’, he was stunned by its lyrics, telling of a parent’s anguish after their daughter had left home.

Fatherhood has also given him an opportunity to relive his childhood trawling through the Mr Men and Little Miss books again. Azman cannot wait until his children are old enough so he can watch his favourite PG flicks!

For James, being a father meant the arrival of another soulmate to join him and his partner, Jess on their life journey. It was so important for James to be a constant presence in his son’s life that both he and his wife have chosen to incorporate their home and work lives by taking on projects to stay at home with their son. This decision also required them to simplify and change their lifestyle. This meant working on an organic farm at times to sustain their family. Wanting what he perceives to be the best for his son,  James also prepared for his son’s arrival by reading up on cloth diapering and home births.

To James, being a father means creating a loving, caring, and respectful family. This  translates to spontaneously doing the house chores and resting only when the other rests. Being a father also means working in a seamless unit with his wife. Their tight, consolidated unit carry out tasks such as preparing breakfasts, gardening, home repairs and minding their preschool son together.

For James, he recognises that being a father also means understanding the fluidity of life and parenthood. This worldview is important for the constant readjustments  to support every family member’s (even the parents!) physical, intellectual, emotional and spiritual growth.

For Lokman Yahya, being a father is a dream come true, as he waited six years for the arrival of his first child. His blessings include Hannan, eight, Suphie, six, and the littlest, Muhammad, who is three. During the dark, excruciating years of waiting for their first child, Lokman promised to give the best version of himself to his children. He shares that he felt both weak and strong when he is with his children. This apt expression of the vulnerability and contentment may resonate with many parents.

“Not having a helper has allowed me to experience the joy in looking after my kids,” Lokman says. He relished changing the children’s diapers and packing their school bags when they were younger. Now that the children are older, he finds joy in sharing house chores with the children.  Rolling up their sleeves, fun quality time also includes tidying up, sweeping, mopping and scrubbing the floor!

Lokman says he wants to continue carrying more than half the load for his spouse as the leader of his family. He feels that it is unfair to burden working women with the sole responsibility of caring for the home, and commends husbands who share in the running of their households. For him, he carries his load within the household by contributing more than his share to the household expenses. He also oversees tasks such as the dishes and the laundry, and caring for the children. To him, being a husband means sharing his dreams with his wife, and for her, sharing hers with him.

These Malaysian men will surely put a smile on many readers today – here’s to many more fantastic fathers and spouses! 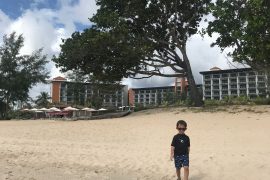 Tips for choosing a family holiday during a pandemic