Mums Of The World – The 7 Bulanan Baby Shower [Peranakan Indonesians]

In ‘Mums of The World’, we ask mothers from around the world about their cultures, traits, babies, parenting and unique traditions. This week we look at the unique ‘7 Bulanan’ tradition – seventh-month baby shower tradition of Peranakan Indonesians, better known as “Benteng Chinese” – a mixed descent of Native Jakartan and Chinese, similar to the Malaysian Baba Nyonya.

The seventh-month baby shower is one of the most important traditions for expectant mothers  in the Benteng-Chinese community, especially first-time mothers.

Initially populating the area of Tangerang, Banten and West Java, the Benteng-Chinese are famously known as ‘Peranakan’. Their heritage carries heavy mixed influences of Betawi (native Batavia/Jakartan descent) and Chinese.

Certain cultural traits and traditions of the Benteng-Chinese are also heavily influenced by the Javanese and Sundanese ethnicities of Indonesia. The ethnic Benteng-Chinese do not speak Chinese, they converse in Indonesian. They are also fluent in the Sundanese and/or Javanese dialect.

This traditional ceremony is very close to the Javanese and Sundanese baby shower. The belief is that this tradition acts as a blessing  for the infant and mother to have a safe and smooth delivery.

We followed Lina and Elsie through their seventh-month ceremony that left us with a sense of amazement at how this tradition brought friends, family and neighbours together.

The day begins with prayers and offerings to their ancestors. They pray that the mother and infant continue to be safe, and for a smooth delivery. Offerings of fruits, turmeric coconut glutinous rice called ‘Nasi Kuning’, traditional cakes and snacks with coffee or tea symbolise gratitude for granting safety to both the mother and infant throughout.

The praying ceremony takes around 20 minutes to complete. The expectant mother proceeds to assemble a unique version of ‘Rujak’ made with 7 ingredients. 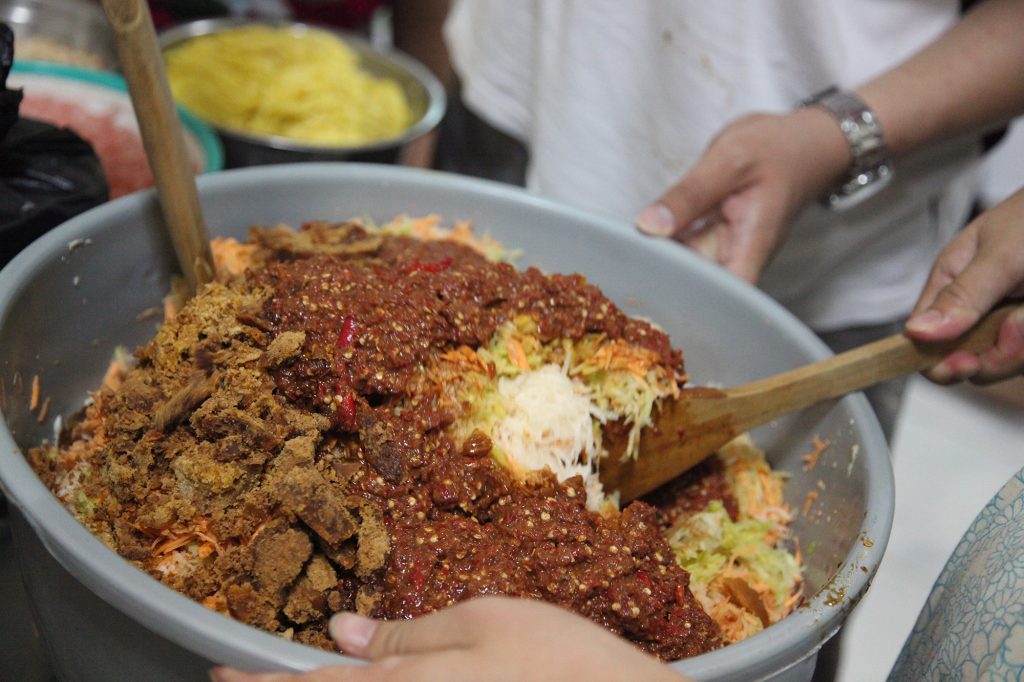 The unique traits of this ‘Rujakan’ is that the whole family (mostly the women) will come together and prepare ingredients comprising shredded pomelo, pomegranates, round white turnips, rose apples, pineapples, grounded chilli paste and brown sugar.

The expectant mother will then have to mix the ingredients and create her version of the Rujak, without the privilege of pre-tasting it. 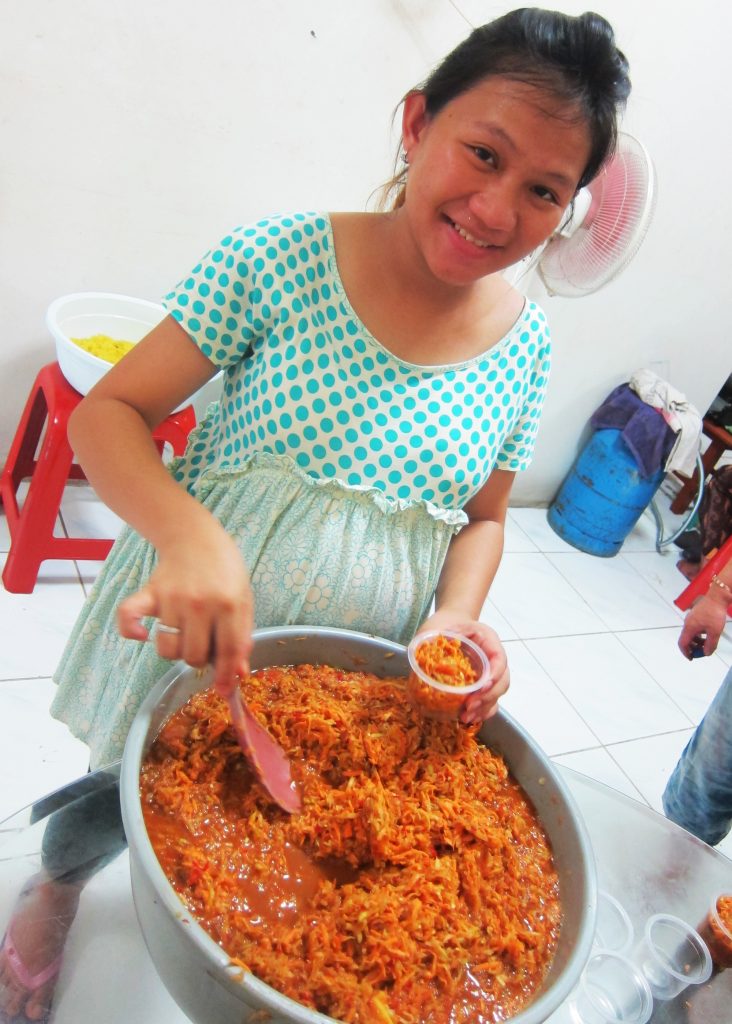 “If the outcome taste is refreshing and sweet then it is believed that the baby will have a calm and introverted temperament. If it comes out to be spicier or with an uneven taste, it signifies a potentially bolder and more rebellious baby on the way,” said Lina amid her excitement in assembling her Rujak.

The first 7 jars of the Rujak will have to be distributed by the expectant mother to close family (parents, in-laws, siblings) and the elderly. The remainder will then be distributed to all the other relatives, friends and people around the neighbourhood.

After the Rujakan, the expectant mom will then be given a traditional pre-natal massage by a traditional elderly masseur who understands the Chinese-Benteng 7 Bulanan tradition.

A pre-natal massage and gender

The massage will then continue with a symbolic 7 flowers floral bath. It is basically a water bath mixed with 7 different colourful fresh flowers.

This bathing ritual is performed by the masseur, husband, elderly in the family like the mother or mother-in-law or grandmother.

The masseur will perform a blessing, followed by a ritual of rolling an egg from the head of the expectant mother slowly down her body, through her torso area, over her baby bump and over the groin, following the birth passage of the baby. The egg will be left to roll off the mother’s body from that point.

Elsie explains that “if the egg is smashed or breaks apart, it signifies that the baby will be a girl; if it withstands the fall or merely cracks then it signifies a baby boy.”

The baby shower is a very important and unique traditional ceremony for the Benteng-Chinese. Family and friends from near and far as well as people around the neighbourhood will make time to visit the house to offer their well-wishes.

After the delivery, Elsie and Lina had to go through 40 days of confinement. During this time, they are required to stay at home and eat special food  that has been prepared to help them with recovery after child-birth.

They are attended to with daily traditional binding and post-natal massages. During this period of time the mother is not allowed to shower or wash her hair.

As for the precious new-born, they are not allowed a bath until their umbilical cord drops. They will be attended to by elders, usually the mother or a confinement lady.  A confinement lady understands the customs, and aids with food preparation and bathing the new-born.

Dessy left her PR career in exchange for perfecting her critical negotiation skills with her two children. She has found solace in writing and is now a freelance writer.