French Parenting – Is It for Me? 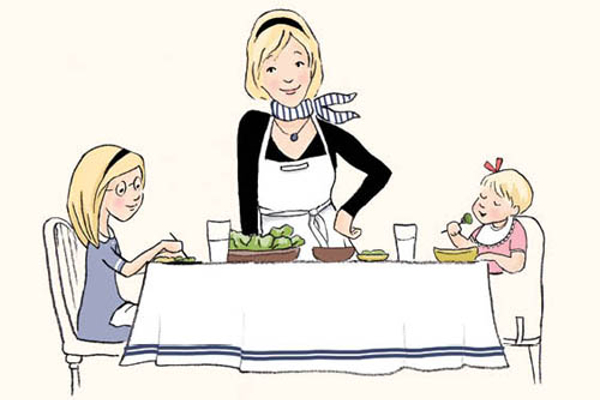 Having just been on holiday in France with friends and family, I’ve noticed that there does seem to be a ‘French’ approach to parenting. I’m referring to books like Bringing Up Bébé and French Kids Eat Everything, which appeal particularly to Americans, some of whom are trying to reverse the trend of over-parenting.

The French approach can be boiled down to this – how much and how often do you indulge your child? The Americans – too much; the French – just right.

Gross simplification, of course, and I definitely witnessed friends struggling with their children in the same way that I struggle with Alex. But it made me start to mull over to what extent our parenting is overindulgement versus attachment.

1. No snacking between meals
Malaysians eat all the time. Breakfast, morning tea, lunch, tea, dinner, supper, and all sorts of keropok and what have you throughout the day. So it’s only natural for us to feed our kids in the same way, somewhat eliminating the idea of a ‘main meal’.

The French philosophy is three main meals with a snack at around 4pm, but nothing else in between.

I like this idea in theory. When we give our kids snacks, it spoils their appetite for more nutritious and substantial food at mealtimes. It also teaches them instant gratification.

My general philosophy is that Alex can eat between meals if it’s fruit. Otherwise I want to try and emulate the French approach, mostly because I saw that Alex was far more accepting of different food at mealtimes because he was hungrier than usual when I tried it out.

2. Minimal bedtime routines
I’ve written elsewhere about all the hoops we have to jump through before Alex goes to sleep. It’s only become harder now that he’s older and better at negotiating.

Our French friends with kids? Their bedtime routines consisted of this: “OK, it’s time to go to bed.” The older kids brushed their teeth. The toddlers had their teeth brushed. And then they were sent to their rooms. Finito. Noises coming from their bedrooms were countered with terse reprimands. The parents did NOT go and lie down with their kids or read them books or sing songs. It was adult time.

I have mixed feelings about this. Yes, I want my own time. But bedtime is also time we spend with Alex, especially since he’s in school all day and we are at work. I like reading with him, and talking to him as he goes to sleep. I’m sticking to our way.

3. Table manners are very important
Children should be seen and not heard. They should sit at the table, use their cutlery and not fidget. They should ask to be excused. They should eat everything on their plate.

Compared to our friends, we were the most overindulgent parents in the world. If Alex didn’t want to eat something, we negotiated that he have half. He ate half of that with his hands. When he finished we sent him off to play so we could eat in peace.

I think it’s absolutely commendable to teach your kids to behave properly at the table. Unfortunately our routines don’t usually consist of one of us cooking and then everyone sitting around at the table together sharing the same meal, so Alex usually eats on his own or perhaps with one of us, and when he’s done, we let him play in that small window of time between dinner and bedtime.

So this one requires a change of lifestyle for us, and realistically, it’s not going to happen. But we have been trying to teach him to wait longer at the table without necessarily providing distractions. Baby steps.

4. Who cares how they play?
While the previous points suggests the French have a more regimented approach to parenting, when it comes to leisure, the parents we spent time with were far more relaxed about things like screen time or supervising their children.

At the playground, parents of toddlers Alex’s age were much more inclined to let them roam about and climb monkey bars without supervision. One of our friends didn’t think twice about their 2.5-year-old playing around the corner out of sight, whereas I wanted Alex in my line of vision.

As for screen time, certainly not at the table, but our friends didn’t agonise over how much time their children sat in front of the TV or a device, and the kids rollicking about as much as any other kid when they went outside.

All this made me realise I need to chill out about these things, and not let my neurotic, over-thinking self take over. More wine and cheese?